Taco Bell, Seamless, Delta (airlines), Farmers, Goodyear and Ace Hardware, targeted nearby consumers via mobile ad networks such as MoPub and Jumptap  and—in a lot of cases—TWC’s popular smartphone app and with Promoted Tweets. Taco Bell, for instance, was running mobile ads through May on TWC’s app but only when the local temperature exceeded 48 degrees.

Tablet usage has increased and Global share of page views for Tablets is greater than Smartphones.

The Shoppers for Tablets and Smartphones show distinctly different behaviours

Here are some interesting shopping behaviors pointing towards extended use of mobile in the path-to-purchase.

Shoppers are using Mobile for more than making a purchase and the attitudes are evolving that make the customers feel their needs are central to shopping as it is more about them.

In addition to seeking better deals consumers are looking at freebies that are relevant such as free music downloads.

In a recent campaign from Unilever Wish-Bone Italian salad dressing, drew an 87 percent purchase intent lift for a spring campaign that recently wrapped, according to AdWeek, based on a comScore report.

The type-in system works like a traditional captcha, though it replaces the randomly generated letters and numbers typically seen on digital devices with paid brand advertising.

Wish-Bone ran full-screen interstitial ads involving a simple captcha call-to-action, such as “please enter: Sassy.” After the mobile consumers typed in the message, they could see the publisher’s content, and Unilever was charged a fee. The Campaign goals of communicating  brand attributes and increasing intent-to-purchase were met.

The media was mostly female-focused news/content providers, including AOL properties, Bauer titles, Meredith sites, Internet Brands’ online publications and Vertical Scope networks. Music service was one of the sites where if the consumer typed in a branded message, he or she received 24 hours of ads-free music.

While most of the Mobile Search begins at home, the final outcome can vary from visiting the store to purchasing online. 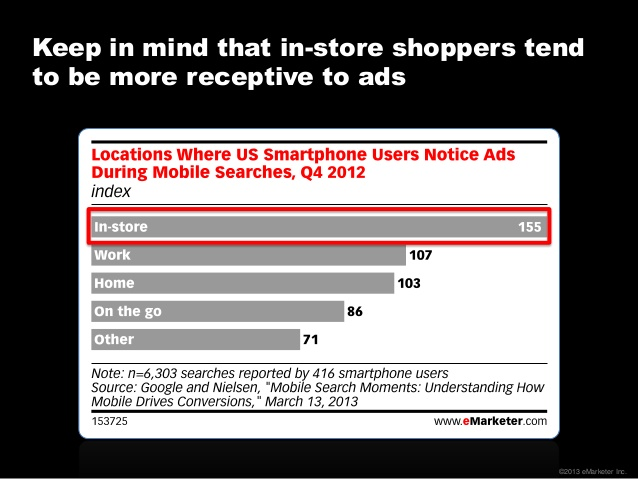 Consumer actions on Tablet and Smartphones tend to differ for Mobile and Tablets.

1. Targeting a Mobile Shopper requires advertising that is within a context and location-based and will engage the shopper in store using the Smartphone.

2. Tablets are used mostly for researching a product and is likely to be used for more personalized shopping and Tablet advertising has a better CTR.

3. Ad formats that tend to get a higher CTR need to be adapted  and placed where the CTRs are highest such as the Leaderboard for Tablets.

4. In-App advertising works in a context and with Location-based targeting, as in the case of Smartphones.

5. Promotions that have a deal or a coupon for Smartphone shopper tend to get better results.