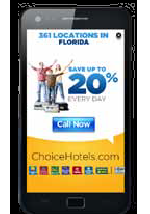 Tablet and Smartphone shoppers differ in their purchase behaviors and use of devices. Here are some of the key findings from “A Mobile Shopper’s Journey: From The couch To the Store” looking at Mobile Shopping activities.

Mobile Shopping Activities differ for Mobile and Tablet users and here are some key findings from the report that Brand Marketers could use for attracting the Mobile Shopper.

1. Tablet Shopping experience and search ranking are critical for attracting  the Tablet Shopper.

According to the report  at-home usage for Mobile Devices is high with 59 percent Tablet Owners using it for research and 38 percent likely to make purchase compared to 24 percent Smartphone shoppers. U.S. mobile shoppers use their devices most frequently in the home, according to Nielsen, as more than two-thirds of smartphone shoppers and four-out-of-five tablet shoppers do—sometimes while watching TV.

2. Target the at-home shopper  with social media sites and create promotions and advertising based on purchase behavior. 95 percent of Tablet shoppers and 72 percent of mobile shoppers who make a purchase, do so at home.

Smartphone shoppers are more active outside the home, but they are more likely to do certain mobile shopping activities from home, such as reading reviews and using social media to make a comment on a purchase. Even though smartphones and tablets are made to be mobile, some mobile shoppers never leave the couch while they’re shopping, as 95 percent of tablet shoppers and 72 percent of smartphone shoppers who make a purchase with their device do so at home, although tablet users are more likely to make a purchase overall.

4. Post-purchase tablets are used for writing reviews and sharing comments on social-media sites as well as following up on purchases.
Mobile shoppers use their smartphones and Tablets post purchase for tracking their orders and writing comments and reviews on social media sites. Twenty percent write comments on social media and 16 percent use their tablets to write reviews of their purchases.
Among tablet shoppers, 17 percent said they follow up on their purchase by looking up information on a complementary product.