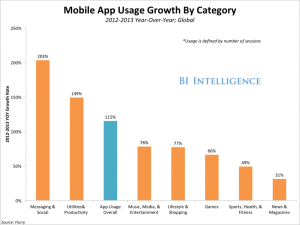 Messaging apps are increasingly popular and like the social networks, the apps are becoming the hubs for everything global smartphone audiences do on mobile. Messaging apps help people connect with one another, share photos, video chat, and, increasingly engage in activities that earn significant revenue for the apps, including playing games, buying digital goods, and even shopping offline.

A report published by IPG details best practices for brands that can help marketers create winning campaigns with examples.

Best Practices for Brands to create campaigns
Provide truly shareable experience
This requires users to join in to a themed conversation or a party.
Enhance the conversation
Use gimmicks that enhance the existing conversation.
Create a community
The community in messaging apps will be based on common interests
Create a brand experience that is fun and gets users to interact.
Brands can successfully link campaigns with ecommerce with offers however it’s best to give consumers what they really want

AdAge published an article on how messaging apps enabled brands create inventive campaigns to reach audiences within a context.

By letting companies create pages as regular users, Snapchat allows brands toy around with its playful format. McDonald’s recently leapt in with superstar LeBron James. But IPG cautions that the app offers “no analytics beyond seeing the number of followers.”
Kik
The three-and-a-half year old service, out of Canada, is less well-known, but IPG is a big believer in its potential. Its user base, roughly 125 million, skews young. Unlike other apps, it is built in HTML5, which allows chatting and sharing to stay inside its own browser. So Kik is positioning itself as a competitor to other chat apps, as well as Google Chrome and Firefox. Brands, the IPG report says, “are already on Kik” — their web content is readily available.
Line
One Direction aren’t the only heartthrobs making use of these apps. Sir Paul McCartney has released eight schmaltzy stickers on Line, where he has some 10 million followers. Sharing and sticking the former Beatle’s likeness comes at $1.99 a pop. Line, which is dominant in Japan, has over 500 such sticker characters, whose sale — together with in-game purchases — raked in $338 million in revenue for Line’s parent company.
WeChat
China’s popular app is not just a chatting tool. It has ventured into e-commerce and, with Tenpay, the payments service from parent company Tencent, mobile money. Major brands like Burberry and PepsiCo have launched campaigns on the platform.
Source : BI Tech, AdAge