Dunkin’ Donuts has rolled out Twitter Contest for Consumer Engagement that requires users to Tweet the predictions of the game with hashtag #DDfieldpass to win an all expenses paid trip, Coffee for an year and weekly rewards. The contest is extended as a part of DD perks that has over 1.5 million sign-ups.

The contest centers around Dunkin’ Donuts Tweeting questions through the match and getting users to vote and Tweet the answers with Hashtag included. The next question date and contest is announced in a Tweet.

Taking it a step forward Dunkin’ has partnered with ESPN to promote the contest. Earlier in the year Dunkin’ partnered with Discovery Channel’s Shark Week.The contest design is simple and has created engagement with Tweets encouraging users to Tweet the predictions.

According to John Costello, Dunkin’ Donuts President of Global Marketing, the Social Mobile Strategy seems to be paying off,

“DD Perks is an important part of our strategy. We launched it earlier this year and we have over 1.5 million customers signed up.

Our Dunkin’ mobile app, which was launched just over two years ago, continues to grow rapidly with eight million downloads. We’re using both of these to engage our customers and provide them with relevant offers to build their loyalty and business with Dunkin’.”

The brands’ social mobile efforts are certainly paying off as it has earlier partnered with ESPN to promote Vine Commercials collectively reaching 21 Million Fans. 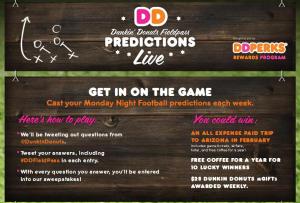 Join us tonight to make live game predictions & be entered for a chance to win! #DDFieldPass NoPurNec 18+ Ends 12/26 http://t.co/PWcCxXIVs5 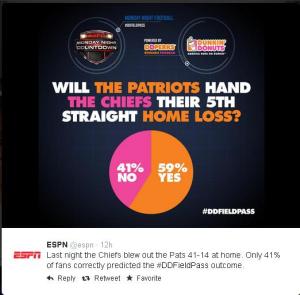 VOTE NOW w/ #DDFieldPass, and be entered for a chance to win a VIP trip to Arizona in February. Full Rules: http://t.co/Xqm96dLMqm

And that’s game! Thanks for playing along at #DDFieldPass tonight!