Brand advertisers have leveraged the affinity for TV programs to boost fan engagement as millions of fans log into their favorite program and Tweet about it.

Nielsen Social has earlier shared reports that indicate a very strong correlation between the TV Ratings and the Tweet activity for the show. The context for conversation is important to understand the level of interest generated with the Twitter conversation, outside the live airing. 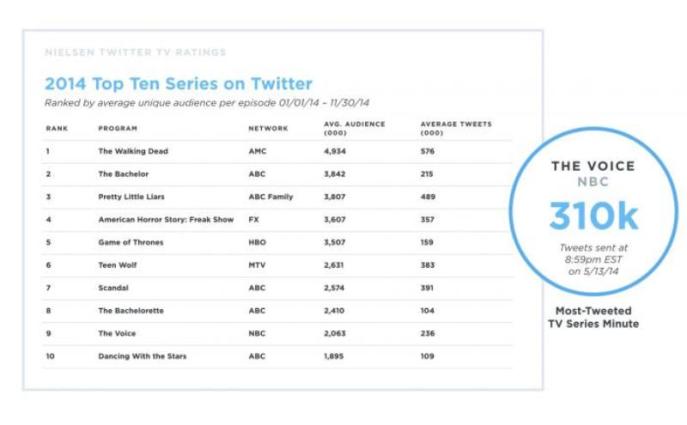 According to Nielsen Social, majority of the conversation takes place during the Live Airing. However, the conversation outside the airing is significant depending on the program,which leads to this question: “What are people Tweeting about in between live airings?” Nielsen Social broke down Tweets into four categories for this analysis of activity taking place when programs are not airing live:

Program enthusiasm – 36 percent  Tweets are about General excitement or anticipation of upcoming episodes. For example:“So excited to see what happens to Character X on #ProgramA on Tuesday!”

Star-related discussion – 13 percent Tweets are  Referencing or engaging with talent while talking about the program. For example: “@Star_of_ProgramA what an amazing performance on #ProgramA, loved it!”

Program Promotions 4 percent Seeing a promotion for a program online or on TV or participating with program-sponsored content, such as quizzes or polls. For example: “Just took the quiz “Which @ProgramAcharacter are you?” and got Character X.“

The analysis of Tweets between these thematic categories varies across programs. According to the report, the Social TV can benefit Brands during the live airing as well as in- between the airings. Brands seeking to engage with audiences through their favorite TV shows need to understand the genre of advertising as reality shows tend to gain maximum engagement during the live airings. To leverage the different programs, brands need to understand the level of interest the shows generate to arrive at the right Twitter Conversation as some programs generate a higher share of Tweets during Live airing while others generated a higher share of Tweets related to program enthusiasm and star-related discussion.