According to Reuters, “The Interview,” a Sony Pictures film about a fictional plot to assassinate North Korean leader Kim Jong Un, opened in more than 300 movie theaters across the United States on Christmas Day, drawing many sell-out audiences and statements by patrons that they were championing freedom of expression. After much controversy surrounding the release of the film, the movie is now available on YouTube and Google Play for all viewers of the United States. Here are some initial Tweets, for audiences tuning in. 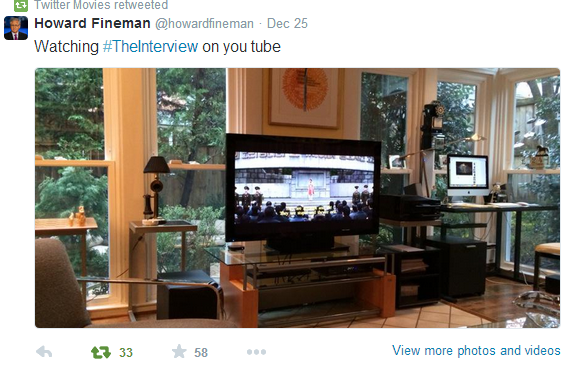 According to a blog post on the official Google blog “So starting at 10 a.m. PST in the U.S., you can rent or buy “The Interview” on Google Play and YouTube Movies. It will also be available to Xbox Video customers and via http://www.seetheinterview.com. Update 3:44p.m. PST: “The Interview” is now also available in Canada.” The post has generated over 3000 Tweets and 700 posts.

#ThrowbackThursday – It's too small to be a space station. #StarWars #tbt #vintage

In a similar hype building, Star Wars prior to the release of movie, one year in advance, has engaged audiences with  Instagram account, which last week posted a late 1970s TV spot offering an action-figure collector’s case with all of the movie’s early characters and quickly received 21,500 likes and nearly 500 comments with a generic Hashtag #TBT.