For the Millennial segment, Creative Crowdsourcing seems to have worked well. The popular fast food chain launched its limited-time offer Pretzel Bacon Cheeseburger on Facebook with a quirky campaign, effectively capturing the attention and appetite of its strategic target—millennials—reaching 85 million of them in the U.S. According to Nielsen Top 2014 Advertising, Wendy’s has scored the highest on brand recall among millennials. 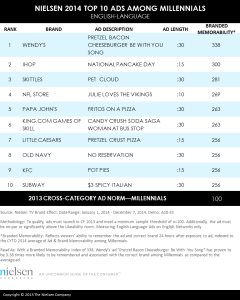 Not only can these viewers can flip through 180+ channels during commercial breaks, they can multi-task on multiple screens and live Tweet their reactions and opinions real-time.

Brands have managed to connect with Millennial audiences with creative strategy that overcomes the fickleness of the Target Audience by using approaches that get the attention of the target group.

Discounted items and a fun approach to creative seems to have worked for the demographic as ,  as seen in the case for  Wendy’s Pretzel Bacon Cheeseburger ads and highlighted discount offerings, like Subway’s $3 Italian sub spot.

According to Facebook for Business, #PretzelLoveSongs, a campaign that included outlandish music videos of professional singers and famous celebrities singing song lyrics derived from content that people had published on popular digital networks reached 85 million of the Target in the US with 75 percent of impressions on Mobile. The program was based on of the passionate conversation people generated for the hamburger and made people want to share the videos with friends and family. For instance, if people posted on Facebook or Twitter about their love of the Pretzel Bacon Cheeseburger, their names and post could become lyrics in the video and attributed to them.

Crowdsourcing creative for Doritos Crash the Super Bowl creative strategy seems to have paid off stacking a response in social networks bringing in over 3 Million impressions, this year. Doritos encourages audiences to create the ad and features the finalists on a dedicated site inviting audiences to vote and has promoted the same on Twitter with #crashthesuperbowl contest. The contest offers winner a prize of USD 1 Million with a chance to be the director for a film.