People spent 6.3 million hours watching last year’s Super Bowl ads on YouTube, as reported by YouTube. More than 75 percent viewers look forward to Super Bowl Ads and as high as 32 percent viewers see a Super Bowl Commercial spot prior to the game. Total viewers are estimated at 112 million with an average spend of USD 68 on Food, athletic Wear and TV with a total spend estimated at USD 12.3 billion.

The seventh year in row that YouTube has mounted AdBlitz, a special channel hosting Super Bowl ads where people can vote for their favorites in its bid to compete with the video advertising Dollars for Social Media. 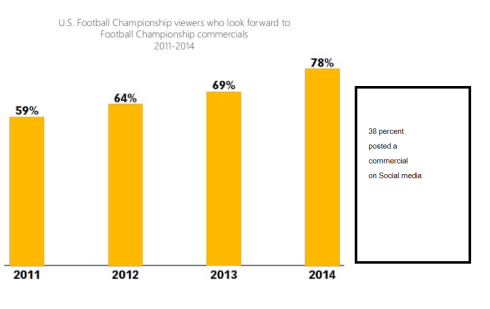 “YouTube will offer a halftime show during the Super Bowl featuring some of its biggest online stars, part of a broader initiative to promote advertisements on the Google-owned video site.

Harley Morenstein, the ringleader of food stunt group EpicMealTime, will host the program featuring musical performances and stunts, while others will produce fake Super Bowl ads. The show will stream live on YouTube during the game, the year’s most-watched television event, airing Feb. 1 on NBC.

YouTube believes the growing profile of online stars like Freddie Wong, whose main channel has more than 7.4 million subscribers, and Toby Turner will help them vie for attention with Katy Perry and Lenny Kravitz, NBC’s halftime performers. More than 60 million people subscribe to the channels of the participating YouTube creators, some of whom YouTube has been promoting on billboards in major U.S. cities.”

Some of the advertisers who have already committed to Super Bowl advertising, one of the most viewed events are

The commercial breaks are once again set to be a flashy affair, and it’s not surprising: Super Bowl 2015 broadcaster NBC is seeking $4.4 million to $4.5 million per 30-second spot, up on the $4 million price tag FOX set last year. Ninety-five percent of the in-game TV ad space has been sold so far.

Here are some key insights for Super bowl Advertising from Bing Ads with popular keywords for search pertaining to advertising.

An interesting spin-off for Super bowl where the beer marketer Newcastle has created a tongue-in-cheek campaign inviting advertisers to pool in to create a Super Bowl spot.The company also said that its Super Bowl ambush encouraged people to try the beer for the first time.