With the post game engagement high for advertisements aired during the game, Brands have found an all new way to create social media engagement by responding to other brands’ advertising.

Some of the conversation hashtags used by Brands have received a high rate of engagement. UpForwhatever hashtag has generated 8 Million impressions while CrashTheSuperBowl gained 5 Million impressions with Twitter and YouTube being the leading social media channels, according to a Hashtag Real-time tracker.

Here are some Tweets that are beginning to show up in the Brands’ Twitter Timeline to engage the Digital audiences.

Hey @budlight what about throwing some #Doritos in the game next time? We’ll provide the goods! #nomnomnom pic.twitter.com/g4s43OB6VK

.@VictoriasSecret you floored us with your spot. Hire us next time? Here’s our audition tape #DoritosSecrethttps://t.co/gWbgvl03Pl

$1 million to #CrashTheSuperBowl? You should’ve told us to sign up, @Doritos.

Hashtracking that gives an update on the Hashtagged conversation for the last 48 hours in Social Media in the Beverages shows Pepsi and Coca-Cola conversations and Tweets have created the maximum impact on Twitter. 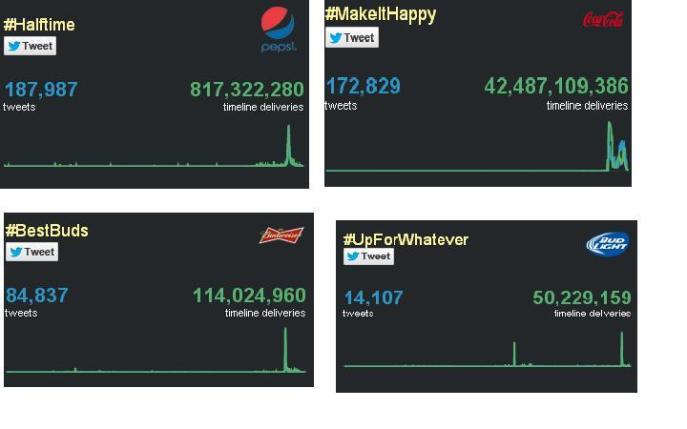