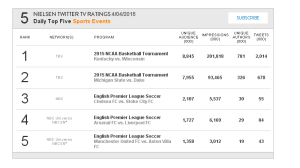 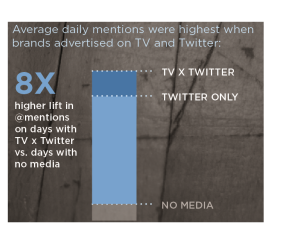 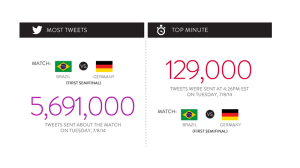 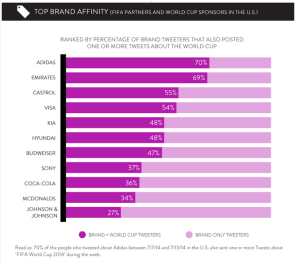 According to Nielsen Social, Twitter TV Ratings for 2015 NCAA Basketball Tournament, Kentucky Vs Wisconsin gathered over 2 Million Tweets  with a unique audience of 8.8 Million, making it one of the most Tweeted Sports events. Last year, TV broadcasts of the tournament generated 14.1M Tweets and 1.6B Tweet impressions. Daily brand mentions were highest when brands advertised on both TV and Twitter: on days that brands took a TV and Twitter approach, they saw an 8X higher lift in mentions than on days they did not invest in either media, as per Twitter Advertising. Twitter TV livens up the conversation with the second screen phenomenon as most social media interactions are  on mobile and brands that are creating real-time engagement with TV activity are most likely to be engaged with.

Nielsen Twitter TV Ratings Daily Top Five lists are ranked by Unique Audience and include four metrics for each of the top Series and Specials episodes or Sports Events.

World Cup one of the most tweeted events in 2014 saw a similar increase in engagement on Twitter with Brand tweets also including world cup hashtags indicating increased brand affinity for the sponsors.

To understand the metrics used to measure Twitter TV activity, the terminology used and the definitions are: 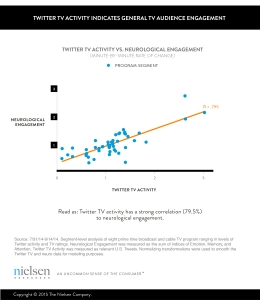 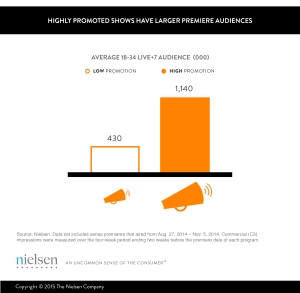 Takeaways for Brand Marketers and Advertisers

Twitter TV activity not only increases engagement and mentions for your brand with real-time interactions, but can also create significant buzz for your brand on social media channels. The level of engagement on social media has been found to be strongly correlated with Twitter TV activity, and the number of interactions for brands that are live with TV activity is greater than the brands that are not present on TV.

TV networks can view Twitter TV activity around a program’s live airing as a bellwether or an indicator for understanding how engaged TV audiences are with programming.

Agencies and advertisers can look to Twitter TV metrics as a part of the media planning and buying process to identify shows with engaged audiences and, by extension, opportunities to increase ad memorability and sales lift or conversions and also reach audiences after the show with TV Ad Targeting on Twitter.

As the activity on Twitter creates better engagement, brands can also use the information to fine-tune their campaigns to understand at what point in programming are the brand messages most likely to be tweeted about. To enable brands to capture the key moments in the Tournament or an Event, Twitter Amplify can help brands reach audiences in real-time with Twitter Amplify. Here is a video with a Highlight reel.

Adidas has created successful engagement with Fans on Twitter, seeing a 59 percent lift in engagement with #QuickAintFair campaign, creating a second screen experience allowing for a real-time conversation surrounding the brand. With TV Ad targeting Adidas was able to create an engagement with shout-outs to fans who tweeted a description for the players moves allowing for a richer interaction. TV ad targeting allowed the brand to engage users on second screen with moments on TV that the users found interesting.