A research by Nielsen, covering over 2 Million data points with over 50 hours of video has shown that consumers are more likely to see your ad for a campaign on a connected device than on Television with Multi-screen usage, with 70 to 90 percent of the ads being seen on the connected device compared to 30 percent of ads seen on TV. The study shows that campaigns that rely solely on TV advertising may not get the viewers’ attention as the attention sharply drops off after the first few minutes. At the same time the recall and attention for brand campaign that involves more than one screen is likely to get viewed and have a greater engagement with multi-tasking audience. Although the TV usage is high, attention to TV drops significantly after the first few minutes.

According to the research, when multi-taskers used different devices they focused attention on the connected device. Attention lost from TV ads can be regained by ads on digital platforms Based on what was observed in a multitasking environment, a campaign served to the same number of multitasking viewers on each device would reach over twice as many attentive viewers on laptop and over 3x as many on tablet or smartphone. 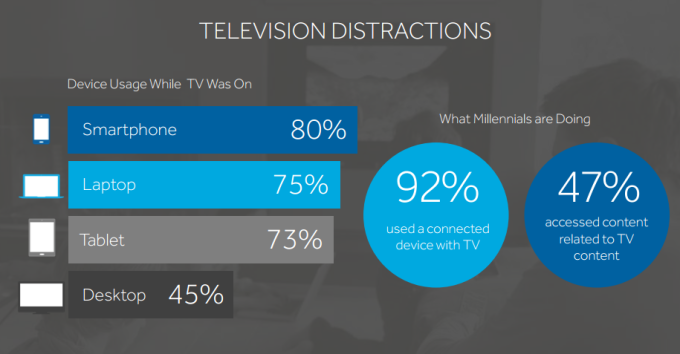 TV is still the initial medium of choice, but some participants quickly switched their attention, opting to begin seeking out content on other devices.
TV provides a constant background, even if the audience are not interested in the specific program that is airing at the time and choosing to engage with content on other devices; the shift to other devices typically happens within the first few minutes.
While television was the most used device (used 53 percent across all respondents) during the experiment, the participants spent less than half of that time paying attention to it while it was on.
Attention to television dropped from over half of multi-taskers to under 20 percent of multi-taskers in the first four minutes.
Ads served during the test were viewed by more than 2x as many viewers on laptops and more than 3x as many on tablets or smartphones than on TV.
Pre-roll was generally more effective than mid-roll at ensuring multi-tasking viewers were attentive to advertising.
When a participant found content they were interested in watching on television, they were much more likely to maintain their focus on the TV set.
With high level of content engagement on Digital platforms Brands should integrate a layer on Interaction and make creative that is effective for mobile devices.