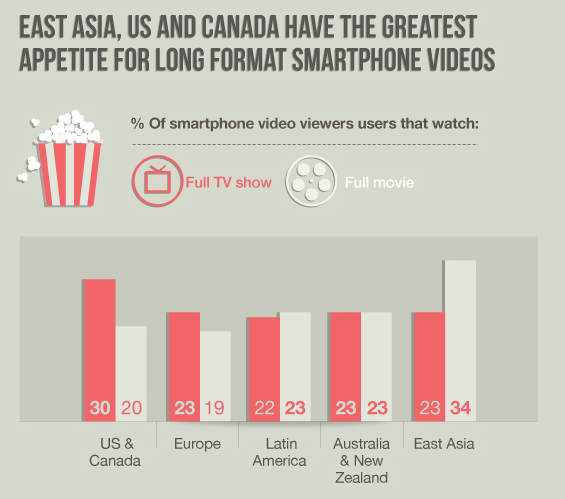 A research report from IAB where 200 consumers above 16 years age owning a smartphone, across 24 countries were asked to respond to the Mobile Video Research , the key findings show that the long form video, more than 5 minutes, is watched by 36 percent of the viewers. The short form video, a more preferred format is watched by 58 percent Smartphone users. As high as 20 percent respondents in US & Canada choose to watch the entire TV show or a Full Movie on Smartphone.

Apps were seen as the preferred way to access the video content primarily because of the stable unobtrusive viewing with 48 percent audience preferring to watch mobile video only on apps. 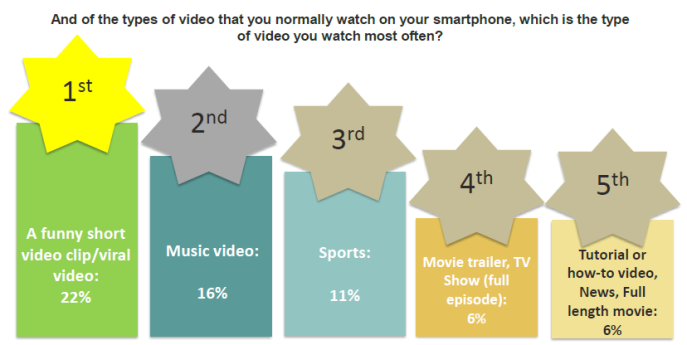 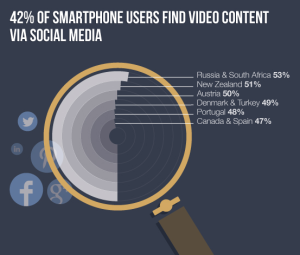 As important as Social Media is for sharing Video with 68 percent viewers sharing video that they watch as high as 42 percent find Video Content via Social Media.

Apps are the preferred way to browse Video content allowing for program surfing across different networks and uninterrupted viewing.

As high as 82 percent want the ads to be personalized or tailored to their interests and 44 percent have seen video advertising in mobile video content.

“82% state that ads that appear in mobile videos should be tailored so they are of interest. This clearly indicates to brands and advertisers alike that being relevant—to context and/or to consumers and their habits/behaviour, is vital to drive engagement.”

The summary of findings from the research clearly points towards creating engaging videos with the ads being tailored to customers; interests that audiences are most likely to engage with. dual-screening phenomenon continues to be on the rise and apps are the preferred way to accessing mobile video.

• Mobile video is not only a short-form phenomenon – 36 percent of smartphone video viewers surveyed say they watch long-form videos (5 minutes or longer) daily or more frequently, as compared to 58 percent of respondents who say they watch short videos (under 5 minutes) at that level of frequency.
• Mobile video consumption is on the rise – 35 percent of respondents report watching more video on their smartphone versus last year. Even more so in U.S. (50 percent), Canada (42 percent), New Zealand (42 percent), South Africa (42 percent), and the U.K. (40 percent)
• Dual-screen video viewing is a thing – 53 percent of smartphone video viewers across the 24 markets say they often or sometimes watch mobile video while watching TV. Only in Japan is this trend noticeably less prevalent.
• Apps are beating browsers as the access point to mobile video – 48 percent only/mostly use mobile apps to watch video on their smartphone. By contrast only 18 percent say they only or mostly use mobile websites.
• Advertising is seen and video viewers in surveyed markets are overwhelmingly open to tailored advertising when watching mobile video.
• Viral video – 68 percent share the videos they watch on their smartphones, and 42 percent say social media is a way they often find smartphone video they watch.