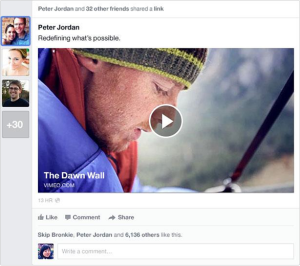 “We have learned that certain actions people take on a video, such as choosing to turn on sound or making the video full screen, are good signs they wanted to see that video, even if they didn’t want to like it. Today, we want to share an update to News Feed ranking that takes into account these actions to help people see more of the videos they care about and fewer of the videos they don’t”.

In addition to showing Video higher up in the News Feed, for users who find video engaging, the brands and publishers whose video content gathers most interaction is likely to be prioritized.

Interactions with a video post is not only based on views, like, comments and sharing, and viewing time, but also the actions such as turning up the volume and turning on the sound, making the screen full size and enabling high-definition.

“so people who tend to watch videos in News Feed will see more videos higher up in their News Feed, and people who watch fewer videos will see videos further down…..We are now taking into account more interactions with videos that we have learned indicate whether someone found that video interesting, such as choosing to turn on sound, making the video full screen, and enabling high-definition. So if you turn the volume up or make the video full screen, we have updated News Feed to infer you liked the video and will show you similar videos higher up in your News Feed. We have found that this helps us show people more videos that they are interested in”.