The Burger wars could not get allayed in a more amicable manner than the one proposed by Burger King in an open letter in a bid to join hands on the Peace day, September 21. The competitive rivalry can be set aside for one day with a new burger proposed to be served for a day called, “McWhopper”. The SVP for Global Brand Management at Burger King, Fernando Machado, insists that this invitation is more than a PR stunt, and has expressed the hope that McDonald’s responds favorably. The open invite from Burger King is hosted on McWhopper.com. While Burger King is still waiting for McDonald’s response, it has joined hands with other restaurant chains to offer a one day Peace Burger.

According to Mashable, “The letter says the proposition to McDonald’s still stands. If McDonald’s wants to join the party, the company is more than welcome, despite the CEO’s sarcastic retort”.

Denny’s, Wayback Burgers, Krystal, and Giraffas, we’d like to build on your individual proposals to collaborate on Peace Day, September 21, 2015. Our idea would be that we all come together to create a burger that combines a key ingredient from each of our signature sandwiches.

Burger King revealed it is already constructing a pop-up restaurant (ostensibly in Atlanta, the location Burger King originally proposed to McDonald’s). All that’s required of the other restaurants is a donation to nonprofit organization Peace One Day, and “a simple yes.” 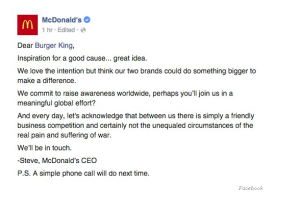 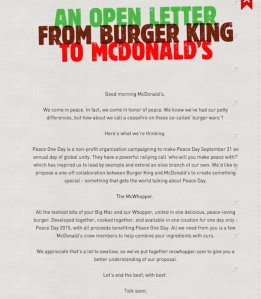 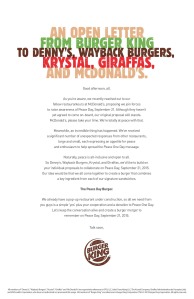 Peace Day, September 21st, is a United Nations-recognized annual day of global unity, successfully advocated by the non-profit organization Peace One Day. “Our short term goal is to expose three billion people to Peace Day by 2016. It’s a big target but it’s very possible, particularly with the support of the corporate sector – they have the resources and ability to raise awareness on a massive scale. That awareness creates action, and that action saves lives,” said Jeremy Gilley, founder of Peace One Day. “This proposal from Burger King is the corporate sector at its best – coming together, putting their differences aside and saying: ‘come on; let’s do something to manifest a more peaceful, sustainable world’.”

The Five brands that bring their special ingredient to create an all new Peace Day Burger may well be setting a precedent in achieving newer levels of buzz that goes beyond  controversy surrounding a typical competitive rivalry.