Halloween retail sales for costumes, candy, household decorations and greeting cards are expected to reach USD 6.9 billion with 157 Million Americans celebrating the holiday at the end of the month, according to  the National Retail Federation’s Halloween Consumer Spending Survey conducted by Prosper Insights & Analytics.

Most Consumers, 67.8 percent, plan to celebrate by handing out candy , or dress in costume 43.5 percent, with 41 percent of people planning to carve pumpkins. Nearly one-third of consumers  32 percent plan to throw or attend a party with friends and family.

More consumers have decided to head to stores or shop online early to pick out costumes and decorations. More than three-fourths of the shopping will be completed in the first half of October. 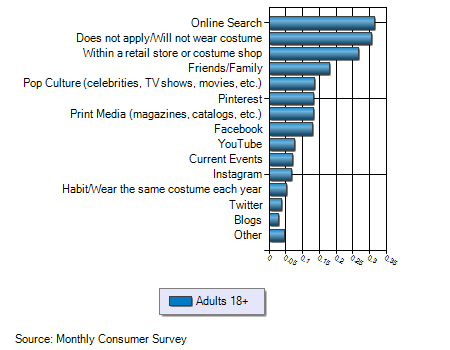 Nearly 32 percent of customers will find costumes online, and 27 percent will head to stores before they make a final decision. Nearly 68 Million Americans plan to dress up for the holiday with an average of USD 27 being spent by each family. According to the National Retail Federation’s Annual Halloween Consumer Top Costumes Survey, adults will spend a total of USD 1.2 billion on their costumes, with USD 850 million on Children costumes and USD 350 million on Pet’s costumes. Minions and “Star Wars” characters each made an appearance on all three top costume lists – adults, children’s and pets.

Millennials remain the drivers of Pinterest traffic around Halloween with nearly one fourths of consumers using the site for costume inspiration.

The Home Depot’s Halloween Merchandise for Household decorations and hottest selling products can be bought online and other Halloween content includes a Pinterest board for Halloween crafts and Ideas. 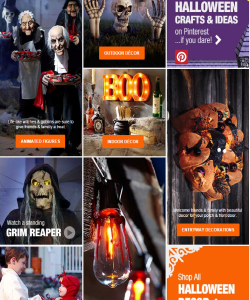 As high as 68 percent of Americans will celebrate by handing out a Chocolate or a Candy making it the most popular purchase for Halloween. Snickers has timed the Halloween campaign alarming the consumers with a countdown.

Burger King has launched a Halloween special burger A 1 with a black bun that has a barbecue flavor, available till Oct 31.

Be careful. It’s watching you. JK. That’s just a wrapper. It can’t actually see you. A.1. #HalloweenWhopper pic.twitter.com/rXR3fZdBOY

Joining us for the 1st night of Mickey's Halloween Party tonight? Share your photos on Instagram with #HalloweenTime! pic.twitter.com/NelKsEIMxu

PetCo is engaging users with #MakeAScene contest, rewarding the winning entry with a USD 5000 prize.

Our Halloween #MakeASceneContest has begun! Enter on Instagram for a chance to win $5,000: http://t.co/xiRvrpl0Qf pic.twitter.com/kDkOR2f23m