Featured Facebook Video is ideal for Brand Discovery, Building Awareness and Promoting Seasonal Offers. With the growing usage of Smartphones In-store and the increased usage of Facebook Apps, brands using Featured Video can get their products and offers discovered “In the Moment”.

The Cheesecake Factory’s Facebook post and featured video introduces  new menu items,  with catchy visual effects, and messaging to get the viewers’ attention in the first few frames – with Oversized (Big Letters and Bold Fonts) text and punctuation, making it seem conversational.  The Cheesecake Factory video is placed in the About section of the page. Featured Facebook Video is key for engaging your Brand audience and Brand Discovery with Facebook being the highest used apps among audiences above 18 years.

Native Video Advertising brought about 2X better results, across the funnel, for Brands that followed the creative Best practices. According to Opera Mediaworks, for the nine campaigns in the study, purpose-built, native video ads that auto-play in the feed drove significant lift at a 90 percent confidence level and outperformed comScore mobile norms across key metrics in both upper- and lower-funnel metrics. The campaigns that followed Best Practices outperformed the former by 3x in favorability, 3x in likelihood to recommend and more than 2x in purchase intent. From a brand awareness standpoint, the campaigns drove nearly 2x in mobile-ad recall and 2x in ad uniqueness. 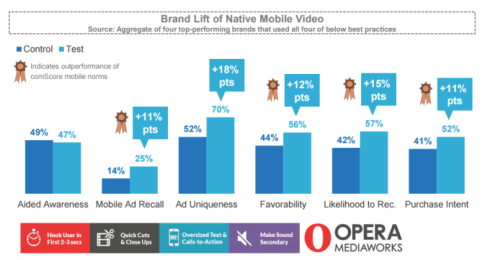 The other best practices recommended by Millward Brown for Short Form video that have proven effective across social networks are:

According to the research, the engagement is on account of repetition in the creative. Repetition creates positive feedback where the repeated event is found more familiar and engaging. A good example here is Snickers Hunger Bars that has repetition built-in making for greater ad recall. An important part of video loop is the way the visuals seamlessly loop from back to the beginning.

Millward Brown’s research finds that multiple messages undermine the effectiveness of  short-form ads, therefore Brands need to so with a single most important message they want users to associate with the brand. Hershey’s promotional pack of 50 chocolate bars goes with the following text “A variety of Everything  Little Witches Want”, with the visual of a witch flying across. The video of 10 secs gets the promotional pack idea designed for Halloween across effectively. Brands that are keen to promote the gift cards for Holiday Season, can use the featured video tactic effectively.

Brand beyond the banner

As important as it is to focus on the product, it is equally important to create a branded impression that grows the affinity for your brand in the short time. Use the colors and theme that resonates with the audience within a context. In the Video featured on Snickers Facebook page the brand has signed up Kyle Long from Chicago Bears to promote Snickers.

The brand has effectively taken the campaign idea of identifying your hunger personality forward by promoting the campaign with the help of endorsement from a player who has a large following and the campaign Hashtag #EatASnickers.

Now with the new wrappers available, Snickers is promoting the new wrappers on Instagram by prominently featuring a wrapper visual and taking forward the tagline “Snickers Satisfies”. As important as it is to have your visuals and context aligned, it is equally important to have your positioning reiterated through mnemonics, taglines and hashtags.

Visually communicate the story for your products by placing them in a DIY content form and how the product weaves into the story. Highlight the products with a product placement and the right hashtag as seen in Target’s video for #TargetRun.

Entice and Intrigue – The story should entice the consumer to want to find out more about the story without telling the whole story.

Create an Emotional Connect – Tell the brand story to make consumers feel for your brand by engaging them with the characters in the story or any aspect that will make audiences feel for your product or brand.

Use time-lapse to highlight any important features for your ads.

Video creative that breaks through the noise either by showcasing the making of the video, unusual situations, drama, humor or larger than life shots evokes a better response.

Use Video In A Cohesive manner

The idea here is to present your campaign idea in a manner that engages audience with your story while entertaining them.

Though research from Nielsen’s Brand Effect studies indicates that the performance from a video ad builds in the first few seconds for recall, awareness and purchase intent, the video ad creative drives value throughout.