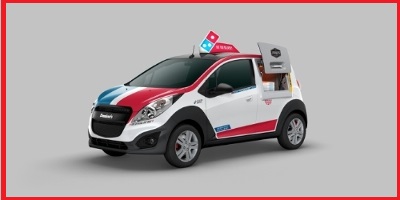 Dominos Pizza, the world leader in Pizza Delivery has launched,  the Domino’s DXP™ (Delivery Expert), a specially designed and built pizza delivery vehicle. According to a press release, Pizza delivery represents roughly two-thirds of Domino’s business and the DXP represents the latest innovation in this space.

Domino’s Anyware offers a number of options to order Pizza including a Tweet. Domino’s  launched Tweet To Order Campaign with a Pizza Emoji, which was a roaring success, generating over 461 K actions. The social engagement generated from the campaign represented 51 percent of Total Engagement for the brand.

Domino’s has recently launched a Rewards Program that allows consumers to accumulate points for online orders, toward a Free Pizza. For every order more than USD 10, consumers can get Rewards Points that can be accumulated for a free Medium Topping Pizza.

The TV Commercial for rewards program highlights the ease of earning a free pizza. The commercial communicates the key idea that getting a free pizza is now easy with “Piece Of The Pie Rewards”, at the same time reminding audiences about the occasions they could order pizzas for.

Domino’s has an engagement strategy that targets the omni-channel customers centered around creating occasions where a Pizza is an ideal meal option.

Let’s also add “the day after your birthday.” #pizzafacts pic.twitter.com/63dZUfPIct

Life got you down? Don’t know where you left your keys? We’re here to give you guidance, Scorpio. #pizzahoroscope pic.twitter.com/1do1jLkkUQ