KFC has launched Colonel’s Road Trip similar to Macy’s Thanksgiving Parade where he visits scenic locations with posts that have a comic-like take on the road trip. Road trips are not new for Colonel Sanders who in  1955, shortly after Colonel Harland Sanders opened the first Kentucky Fried Chicken restaurant, drove cross-country recruiting franchisees.

KFC has played up Colonel Sanders superhuman like persona where his colonel’s personality is symbolized with white suit and a black ribbon tie. 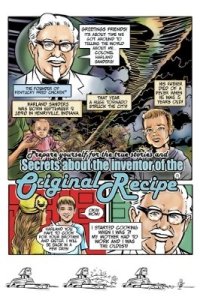 “Harland Sanders wasn’t born ‘The Colonel.’ Like most comic book heroes, he started out as an underdog and overcame obstacles that gave him superhuman cooking skills and an amazing superhero costume.  Both catapulted him to iconic status,” says Kevin Hochman, chief marketing officer, KFC US. “We thought a comic about the Colonel’s true-life origins story would be interesting to fans, as well as anyone who loves an amazing superhero story – only this one is one hundred percent true.”

St. Louis, you are great to parade through with a statue of oneself out the sunroof. #ColonelsRoadTrip #MacysParade pic.twitter.com/8k6D25pAt0

The Rocky Mountains are doing the hard work of being mountains. On board with that. #ColonelsRoadTrip #MacysParade pic.twitter.com/XeP6jJJhzi 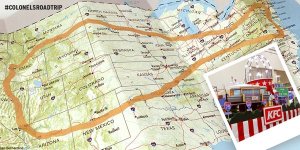