Content Amplification with Shares on Social media has grown by 27 percent in 2015 over 2014, making audience engagement with shareable content a priority for publishers and brands. Likes and comments make for 86 percent of the overall social media actions.  Social Media posts sharing grew by  27 percent as compared to likes and comments that grew by 14 percent YOY, making shareable campaign content as a lead engagement tactic for Holiday season. Brands that are active with festive themed campaigns evoke emotions from consumers that is viewed as one of the key motivators for content sharing according to a study by Shareablee.

Brand Content that prioritizes shareability increases engagement and awareness for Brand Campaigns. Coupling the Brand content with moments that matter for the mobile millennials can boost activation for your brand resulting in greater sales and conversion. Retail Brands social media “post shares” grew by 66 percent ahead of Media publishing, however, accounted for 4 percent share of voice amplification, compared to 38 percent share of voice amplification for publishing.

Though campaigns that feature influencers and user-generated content are likely to be amplified more, brands have seen a similar amplification with use of more popular themes such as Star Wars toys and content that gets reposted as a regram with a popular holiday linked theme. The content that is most likely to be shared is seen to help audiences with Discovery, has utility or evokes an emotion.

BuzzFeed Food one of the top ten publishers, grew by 31 percent over 2014 in the first three-quarters after Fox News and BuzzFeed Video, primarily with recipes led content and engaging content formats.

Setting our alarm and laying out the goods. Because this: pic.twitter.com/RmeMe8aPBl 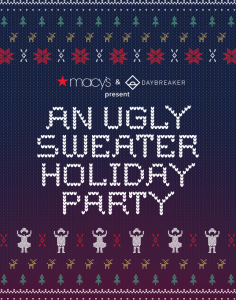 Macy’s Strategy for Holidays has something for everyone on Social Media, right from an Ugly Sweater party to a Hover-board.

According to a Shareablee Study, analyzing Social Media posts for 2015, Media and Entertainment and Media Publishing dominated social media  in the US with 1.7 billion and 1.2 billion total shares from January to November 2015, respectively. The media and entertainment category is led by Fox News with more than 37.8 million shares, while BuzzFeed Food tops the media publishing category with 44.5 million shares.

Brand Content makes for 11 percent of all Social media actions. According to the study, “Year to date in the U.S., brands have published 14.1 million posts on Facebook, resulting in 32 billion actions (likes, comments, shares) with consumers, of which 11 percent involved sharing of a brand’s content”.

As per Shareablee CEO Tania Yuki, “Shares of brands’ content on Facebook have grown by 30 percent year to date compared to 2014, and this has driven increased impressions, affecting brand awareness. Understanding what content consumers share on social media can help marketers reach more audiences while also being more efficient with their social spend.”

Macy’s Social Media campaign engage the holiday shopper with campaigns that are targeted at different segments right from teens to beauty and fragrances shoppers, with a chance to be featured on Macy’s site. Macy’s social media engagement for November was one of the highest among Retail Brands with over 580,000 actions on Facebook, Twitter, Instagram, Tumblr and YouTube from 15.4 million fans and followers.

Still searching for the perfect present? Don't worry, with these beauties you're golden! pic.twitter.com/SrSGWwkDAy

Macy’s Social Media engagement across segments with  an emotive theme, engages audiences with inspiring gifting ideas. In a campaign featured by Shareablee, where social media engagement, was based on personal stories with User Generated Content drove 61 percent of social media actions.

Segmenting your audience and engagement based on inspiring gift ideas makes for a more engaging campaign. For engaging audiences through the Holiday season Macy’s has combined social media engagement with brand activation idea such as ‘Ugly Holiday Sweater Party” in different venues for which the tickets can be obtained with Shopping at Macy’s.

Retail Brand Content Shares have grown by 66 percent ahead of Publishing and TV on Facebook and Twitter. Campaign Content that has been seen as shareable has led to actions that make for more than 50 percent of all social media actions for the brand.

Starbucks Social media engagement relies on making audiences look good with their peers by being in the know, which is one of the motivators for sharing content. Starbucks strategy of being someone for everyone makes for content that resonates on every occasion.

These Kohl’s Cares gifts are just $5 each, and every purchase helps kids in your community. https://t.co/jbrpd4DpQu pic.twitter.com/QCWQc0xhhE

Digital Video and popular theme such as Star Wars can bring greater engagement, with content that is most likely to be shared. Kohl’s used storytelling approach making for the right holiday season engagement.

Little Debbie partnered with The Peanuts movie to create exclusive offers with Peanuts and gang, creating one of a kind emotional engagement, that is likely to make content that strikes a chord with the target audience.

Little Debbie’s engagement with products that are right for Christmas such as Christmas Santa Brownies with a site that features product locator, which helps audiences find the product that they are looking for and share the same on social media. 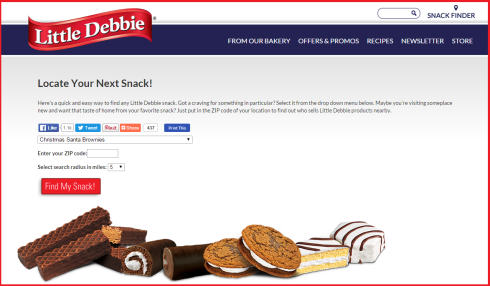 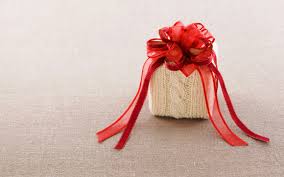 Little Debbie engages audiences with content with customized brand content complete with products that are just right to make your holidays special.

Walmart’s segmentation strategy that focuses on audiences who gift shop and entertain together with influencer posts, make for a cohesive content offering, that engages audiences with diverse interests.