Adobe Digital Index, reported an increase of 12.7 percent, with online sales at USD 83 billion for the holiday Season, making the season better than expected, where the online sales were expected to grow at 11 percent Year-Over-Year. As reported by Adobe Digital Index,  “It wasn’t until the very end of the season that we saw a significant surge in sales, which drove the 12.7 percent year-over-year growth. Phone traffic exceeding desktop traffic some days was one of the drivers of that growth.”

The online sales during December were propelled by “buy online, pick up in-store” option offered by  retailers. With the service, the concerns around product availability were mitigated, extending the shopping season until the very end.

“During the last couple of years, there was a lot of talk about retailers trying to spread out the holiday season,” White said. “This year, they really weren’t able to get the buying started that much earlier, but they were able to keep it going longer into the Christmas week.”

Mobile Phones were at 39 percent of visits and 17 percent of sales during holiday 2015, which is more than the share of sales and traffic driven by tablets. However, share of sales from tablets at 44 percent from mobile devices in comparison with share of visits at 24 percent reveals a higher conversion rate for tablet users. 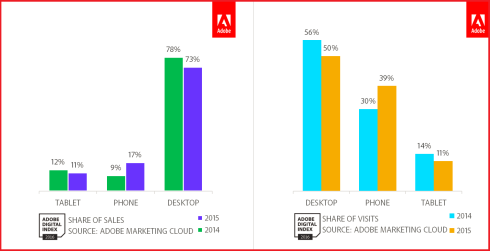 ADI reveals that search and referral sources were the key drivers of traffic at nearly 57 percent, for holiday season with email and display advertising gaining momentum.

Thanksgiving Day was the fastest growing Sales Day with Cyber Monday being the biggest for Online sales. Limited time Deals were the highlight of Retail sales strategy as product view rates for Out of stock products were high. The Deals available for different categories varied throughout the season, with discounts on electronics being the highest during Thanksgiving, while for Apparel discounts were available throughout the season.