Humor in advertising is seen to work for Brand Impact, according to a Millward Brown report based on 132,000 brand research case studies, globally. In North America as high as  69 percent of campaigns that are high on impact, make use of Humor as compared to 44 percent of campaigns in the low impact quintile, making for a 25 percentage points difference that shows humor in campaigns leads to more impactful campaigns. For persuasive online and digital advertising, Millward Brown recommends that New, Relevant, Credible and Different creative are likely to work better. At the same time Millward Brown found that though Humorous campaigns create impact, they are seen to be slightly less persuasive globally. Humor in campaigns is however seen to increase involvement making the ad more memorable.

“We observe a strong relationship between humor and impact because humor can drive involvement, which drives memorability.”

However, research also points towards an optimal approach to humor may be based on target groups rather than categories. Humorous advertising may score high on impact as the audience becomes more involved, however, it has not been found to be persuasive. 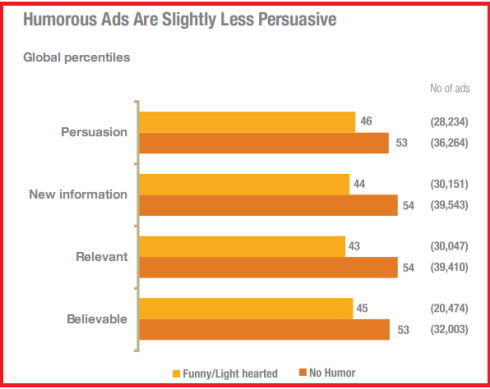 Here are Four Ways Brands Can Build Humor in Brand Campaigns. Advertising that is seen as persuasive is new, relevant, credible and different. Using humor in brand content and creative for the campaigns can build on persuasiveness while bringing about greater impact.

Verizon Sweepstakes that gives users a chance to enter a draw with prizes every 50 minutes has advertised the offers with a tongue twister that has a  satirical take on the cheer leading drill. The tone and the visual messaging though light-hearted add to the overall campaign idea of getting your game day act ready with a better network. A microsite  gives contest details and prizes that can be won by the hour. While rewarding the winners, Verizon has made use of Social networks to announce the winners with the same light-hearted creative treatment.

Verizon is giving away a four-day and three-night trip for two to San Francisco including air transportation, hotel stay, two tickets to Super Bowl 50, and a USD 2800 check. The prize is valued at USD 12,800. According to Phone Arena, Verizon is giving away USD 568,400 worth of prizes in the Minute50  contest which runs until Midnight EST on February 4th. The contest is easy to participate in with contestants that can enter with a textmessage of Minute50 or enter online from the contest site.

Optimize your Messaging with Creative elements that are likely to make your messaging different and at the same time credible, making audiences aware of the real benefits. Humor in Tweets is more likely to be shared as seen from Twitter’s research.

Amazon Echo has been advertised as an effective soundboard by the duo Alec Baldwin and Dan Marino to plan the Super Bowl Snacks stadium complete with Cheer leaders in an online advert that taps into the lighter side of Super Bowl Game Day event.

Infuse humor that helps you build context for better memorability. By using references to elements that symbolize the context Brands can come across as more persuasive.

Old Spice in the newest campaign Smell Legendary announcing the launch of new Hardest Working collection has used online video creative where humor is effectively infused humor to bring out the product attributes such as “Odor Blocker that delivers legendary protection for legendary man”. Bob Giovanni builds on the brand story that inspires men to smell legendary by showing situations that are exaggerated to invoke a light-hearted emotional connect.

With as high as 65 percent of the audience, preferring videos for product research, using humor for highlighting product attributes can make your campaign more persuasive and memorable at the same time.

Axe Find Your Magic campaign targeted at the younger audience uses exaggerated situations to empathize with the target audience, by creating a series of situations that the users may find their magic.

The messaging for the campaign strikes a chord even though the situations are exaggerated.