Papa John’s Big Fan Payback sweepstakes is an interactive contest that will run during the game. The Sweepstakes has been designed to get audiences connected to Papa John’s while the game is on. The contest design requires fans to follow the prompts tweeted by Papa John’s  during the game, for responses sent with a heart emoji and winning entries posted by another twitter handle. The contest supports the overall campaign approach that Pizza and Super Bowl make for a perfect Game Day combination.

Papa John’s contest strengthens the product story for the brand where the engagement for the pizza brand is based on the fandom associated with the Super Bowl. The contest design sets itself apart making the brand interactive with an experiential engagement.

The National Chicken Council released its annual “Wing Report” on Wednesday and according to Time, the number they came up with estimates that 1.3 billion wings will be consumed on Super Bowl Sunday. That’s a 3 percent, or 37.5 million wing, increase from last year.

According to Trends on Google, the real-time search interest for Super Bowl recipes is one of the highest. Buffalo Dip and Chilli are the most searched for recipes. 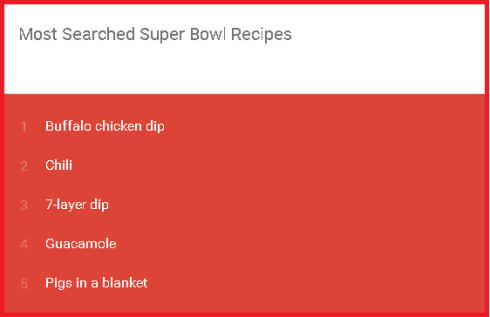 Content and posts through the week featuring recipe ideas and tips for party planning during the Super Bowl week are likely to engage the fans.

Get started on this tasty Super Bowl treat and show support for your team!https://t.co/EgVZwjvmNf

AllRecipes.com in partnership with InstaCart has made your Super Bowl party even easier, Instacart’s shoppers can pick up the items at local stores and deliver them to shoppers in the time frame specified.

The feature is live and available in  over 18 metro regions. Deliveries are made from the supported retailers, including Whole Foods, Costco, Safeway, and others, depending on your region and preferences. For those of you who are in it, tailgating or at home, here are some amazing recipe ideas.

Here are 50 of best recipes to make this Super Bowl healthier and more delicious than ever.https://t.co/RivAKbznDf pic.twitter.com/vtUXdWlX9Q