Twenty-three percent of those surveyed by Salesforce will use more than one social channel while the Denver Broncos take on the Carolina Panthers on Sunday. Salesforce Research surveyed 1,082 consumers and found that Super Bowl 50 viewers plan to use their devices and social media during the game. To plan your social media play for the Super Bowl, brands can look at targeting audiences with social media segments based on usage of social media channels.

For brands targeting Social Rookies, a segment that makes for 77 percent of Super Bowl fans who follow the game on one channel only, Facebook with 48 percent of super bowl followers makes for an ideal reach builder. As high as 80 percent of the audience will be using more than one device. As high as 7 percent will be on three devices or more. Penetration of Mobile devices is higher than the TV’s standalone reach for all segments, making mobile strategy a must for targeting audiences on Social Media.

Customers who follow the game on more than two channels are the MVP segment and make for 12 percent of social media audience.

Gen Y consumers will also look to get their Instagram games on during the Super Bowl. Among those between 18 and 34, 21 percent will use the pictures-and-videos platform during the game. In the 18-to-24 bracket, 23 percent said they’ll use Instagram.At the older end of the spectrum, 9 percent of participants ages 35 to 44 will use Instagram, while 11 percent of those 45 to 54 plan to do so. The more popular channel among 18-24 years old is Snapchat. Twice as many viewers ages 18 to 24 (31 percent) will use Snapchat during the Super Bowl compared with all other age groups. Snapchat is only behind Facebook in this age group, with 61 percent saying they’ll use Facebook during Super Bowl 50. Eighty-nine percent of viewers ages 18 to 24 plan to use a smartphone during the game compared to the 86 percent who will use a TV. In other words, 3 percent of young adults plan to experience the Super Bowl without the tube (unless it’s YouTube, that is). 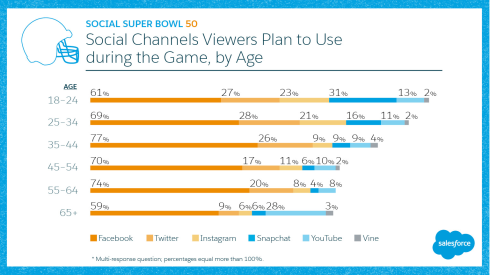 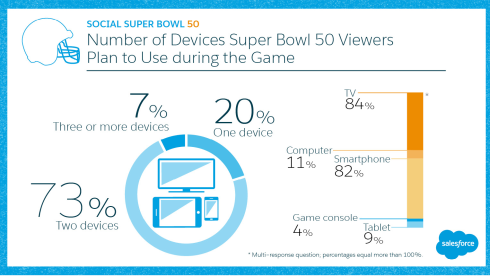 According to YouTube blog update on February 5, Big Game ads and teasers have been watched more than 140M times so far this year, with more than half of all views coming from mobile devices.

Ritz’s “Big Game Snacks” campaign generated more than 29 million views by the end of the day Thursday, according to Visible Measures, more than videos related to actual Super Bowl buys.

Real-time advertising offers opportunities for brands and advertisers to target audiences in the moment while they are following the game, with native ad formats and in-stream or display formats.

Who is your Audience

Start with identifying your core target audience and the channels that they engage the most on. Social Media advertising for the audience that is following the game on one channel will differ from the audience segment that is following the game on more than one channels. If you are targeting the 18-24 yrs segment Snapchat is likely to bring about greater social media actions than Twitter.

What is the Audience Size

The Apps that your audience are using to follow the game conversation offer opportunities for cross-device optimization with real-time ads that provide unique reach for advertisers. Depending on your target audience you can determine the apps that you want to advertise on.

Where Is The Social Buzz

When Is The Right Time

Tracking sentiment of social media game enthusiasts across social networks can help brands determine the moment that is likely to drive a positive emotional reaction for your brand. Networked Insights that tracked and measured real-time emotional connect has shared insights for brands on capitalizing on social media chatter for real-time marketing moments.

Real-time marketing is about understanding your customers and prospects in real-time and using the insights to outflank your competition. Creating a sense of urgency with the marketing in the moment message can help  amplify your message and content.

Excite your audience with a message that resonates in the moment. This could be tied with a moment in the game or something peculiar that ties in with your brand’s messaging or the brand story or an Influencer post.