Twitter’s research of over 9000 Direct Response campaigns revealed that the campaign performance on Twitter is determined by the characteristics such as the length of the Tweets, specific information shared and rewards offered. There are an overall nine set of factors that were found to be common among high performing Tweets.

Results are spelled N-E-W
Tweets that talk about new products or services have a 10 percent lower CPA, a 23 percent higher clickthrough rate, and 26 percent lower Cost Per Link Click (CPLC). 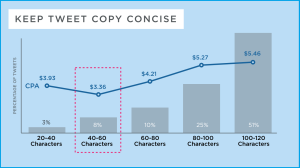 Emphasize What Matters
Promoted Tweets with 20 percent or more of their characters in caps resulted in a 2 percent higher CPA reporting a 9 percent lower CTR.

Build Buzz With @ mentions
Tweets that mention another handle have a 6 percent  lower CTR and a mere 3 percent higher CPLC.

Lay off the hashtags
A Tweet with one or more hashtags reported a 24 percent higher CPA and a 3 percent lower CTR.

Test your creative
Vary image types and copy for two to three Tweets from each campaign and replicate the more successful Tweet formats.

Another Tip shared by Twitter is to include words that communicate urgency, though only 13 percent of Tweets were found to  use such words.

“Tweets with urgency words like hurry, fast, quick, running out, and limited time have a 10 percent lower cost per acquisition (CPA) and a 10 percent higher clickthrough rate (CTR). “