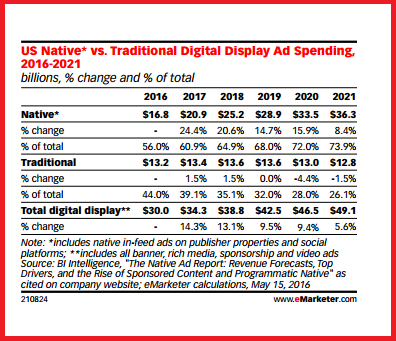 Native Advertising is defined as “A form of paid media where the ad experience follows the natural form and function of the user experience in which it is placed”. According to an eMarketer report Native Advertising has made a big impact with half of all digital display advertising attributed to Native. The share of Native advertising is likely to reach  to three-quarters of all Display Spending by 2021. The key reason for rise in Native ads is that all advertising on Facebook and other social sites is native. The huge success of Facebook’s News Feed ads has helped boost native display spending to nearly  USD 17 billion this year, according to BI Intelligence.

Native Advertising has been proven more effective than banner advertising and some of the key data points to guide your media planning are:

To understand the impact of Native Ads, Nielsen showed a video simulating the experience of scrolling through an editorial feed. The feed was paused and the participants were shown either a native ad or an in-feed banner. Using a combination of EEG data— measurements of neural activity in the brain—and eye tracking, Nielsen quantified where and how the participants’ focus was being directed.

Respondents assimilated the Taglines better for Native Ads as compared to banner ads that are read peripherally.

Text is read as the focus is on seeing content rather than the thumbnail.

Message association is strong for Headlines.Words from an associative network similar to words included in the headline can result in a higher message resonance lift and can subconsciously influence brand perception.

The research recommends “One of a native ad’s most valuable assets lies in the ad’s text—the time and focus required to process it, and the word associations it calls to mind. Each adjective or noun in a headline—including the brand name—is stored in an associative network of related concepts. Activating one concept automatically triggers the others, strengthening those connections over time. When writing headlines, marketers must be strategic in their word choice, activating associations that are aligned with the brand or the campaign. To increase the likelihood of those associations, and the strength with which they are made, key brand assets (e.g. logos, thumbnails, etc.) should be included in the native ad”.