According to  Q2 2015, report by Nanigans, Facebook advertisers are reportedly seeing higher campaign ROI with higher CTR and Lower CPC. Mobile Video continues to be the fastest rising ad format contributing to 21 percent of all advertising revenue, increasing by 40 percent over last quarter.

Facebook CPC and Facebook CPM have either declined or held steady globally after seeing a spike in the last holiday season, making for improved return on advertising dollar spend.

According to an update published , Facebook has recently announced the changes in Ads API Version 2.4 with Cost Per Click being referred to as Link Clicks, and the metric will be changed  to measure: 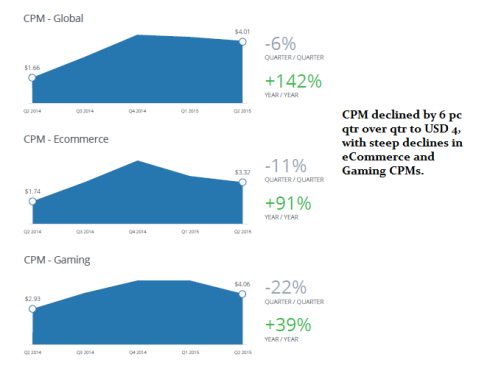 The Ad format that are most popular with Nanigans advertisers, largely direct response advertisers, are Unpublished posts, Mobile App Install Ads and Domain Ads, making for 95 percent of all Facebook advertising.

“After you’ve placed a Facebook conversion pixel on the page associated with your desired conversion action, our delivery model looks at data and then makes adjustments to your bid to serve ads to the people most likely to convert. For people who we predict are more likely to convert, we’ll bid more aggressively than for those who have a low conversion prediction. Advertisers are billed based on the number of impressions delivered to this audience”.

Use Dynamic Product Ads in a Carousel Format as that allows for using video as well as highlighting different product features. With link Clicks you will be able to know the ads that are performing the best for a given metric i.e. Shop Now Vs. Click on Websites. Test the ad creative that works best for your product category with different links.

Enable Brand Discovery with  Awareness campaigns that are a combination of Static and Video Posts.