Holiday 2015 non-store retail sales grew 9 percent to a total of over USD 105 billion. Cyber Monday was the leading Sales day, the sixth year in a row, with more than USD 2.2 Billion spent on Desktop Computers alone. According to NRF, “Holiday sales in 2015 increased 3 percent to USD 626.1 billion — solid growth considering the unforeseen weather events across the country and an extreme deflationary retail environment.” NRF forecasted total growth, including online sales, of 3.7 percent.

Adobe reported mobile devices accounted for about 25 percent of sales and 45 percent of visits to retail websites from Nov. 1-Dec. 22. According to MarketWatch, Adobe said online sales in 2015 holiday season were up 12.7% to $83 billion. More than 31 days during the period between Nov. 1 and Dec. 31 surpassed the $1 billion mark in sales, a record that exceeds 25 days in 2014. Online sales grew 56% year-over-year on Dec. 23, up to $920 million from $590 million in 2014. “It wasn’t until the very end of the season that we saw a significant surge in sales, which drove the 12.7% year-over-year growth,” said Tyler White, an analyst with the Adobe Digital Index. “Phone traffic exceeding desktop traffic some days was one of the drivers of that growth.” The buy-online-pick-up-in-store option was a growth driver in the week before Christmas. Adobe had forecast 11% overall growth for the season, White said.

According to Marin, for the days between Black Friday and Cyber Monday, smartphone clicks grew by 87 percent YOY almost equaling desktop clicks. This reflects a dramatic increase compared to 2014 when smartphone clicks accounted for only 28 percent of all clicks.

Clicks grew across smartphones, tablets, and desktops, with the large increase in smartphone click share being attributed to growing smartphone adoption. The increase in tablet and desktop clicks YoY shows that people are using their smartphones in addition to desktop and tablet devices, not instead of them.

Marin saw similar trends across spend, with the ad spend share for mobile growing by 66 percent YoY.
Overall ad spend for mobile was up 101 percent with spend doubling on both Google and Bing YoY.

Cyber Monday beat Black Friday in terms of clicks and ad spends for both 2014 and 2015 with cost per click (CPC) prices markedly higher than any other day over the weekend. 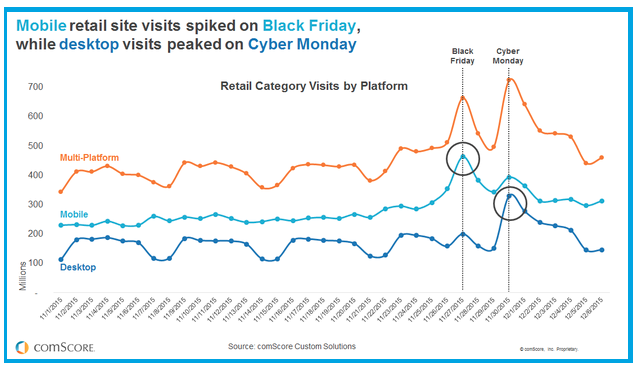 Decide on your campaign theme and core campaign idea.

Start with analyzing the holiday data that is available to you from last year as well as Back To School campaign data. Highest priority is to make sure all budgets and metrics are aligned to factor in any changes in consumer behavior.

Allocate budgets to optimize your campaigns across channels and devices with a single customer view. Key days are Thanksgiving, Cyber Monday, Black Friday and Christmas.

According to an SEO firm,WPromote the best practice is to begin setting up heavily targeted paid ads, display (video/image ads) product listing ads, and remarketing ads in Google AdWords and Bing Ads at the earliest to coincide with seasonal days.

Plan your Mobile engagement strategy. Optimize your every campaign for mobile, with mobile PLAs, a mobile website, and accurate device tracking set up in your analytics. In case you have an app then planning an app engagement campaign within your brand campaign can increase your conversions. Native Social Media Ads are important for Targeting Mobile users. Mobile App Promotion Ads can get your app installed and downloaded before the start of the holiday season.

Create holiday-optimized content, including an infographic or holiday gift guide, hosted on a website page instead of a blog, and leave it on the main site navigation until launch in order to get indexed in Google and start building equity as early as possible. This could improve CTR for holiday related terms.

Embark on a campaign of social network posting about holiday gift guides, sales, wish lists, and other promotions as early as October but no later than the beginning of November; budget for paid/promoted social posts to increase visibility and audience reach, especially in the run-up to Thanksgiving.

Set up a new email promotion workflow specifically for the holiday season based on what holiday products, promotions, or categories a user visits on your site.

Personalize your promotions, in particular, mobile, social and email promotions; tailor specific offers to customers’ needs to increase CTRs and conversions and turn mobile, email and social channels into huge revenue generators. Look for the mobile moments that are right for promoting your offers with push messaging campaigns. Create a Follow through marketing plan to optimize ROI from your campaigns, by analyzing reasons for cart abandons and setting a remarketing or an email marketing campaign.

Google with its large display network, offers advertisers unparalleled reach for advertisers seeking to optimize the reach for their campaigns. To capitalize on the ability to target audiences across sites and channels, Google has launched Universal App Campaigns that can be set as a Campaign type within AdWords , helping app publishers in getting their App Discovered.

Google sites are the top referral source for traffic for the top hundred Digital publishers and as high as 22 percent of users discover apps via a website or through an ad on device browser or app, making it as the second most significant channel for App discovery after App Store Search. 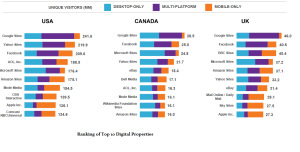 Universal App Campaigns will be available to all developers and advertisers as a new AdWords campaign type that helps you connect with app users across Google Search, Google Play, YouTube, and the Google Display Network.

Universal App Campaigns are the one-stop-shop campaign type that scales your reach and maximizes Android app installs across Google’s entire suite of ad platforms. Google’s Universal App Campaigns are automated that are set-up by pulling in your app images, videos, and app description directly from your Google Play store listing to generate ad formats that look amazing wherever they’re placed.
END_OF_DOCUMENT_TOKEN_TO_BE_REPLACED

Google PLAs are now available with a “Buy Now” option and select retailers can use the option to retarget audiences that have engaged with brand’s advertising by offering a Click-To-Buy option that comes with the newly rolled out Ads.

That ad will lead to a retailer-branded product page hosted by Google, where the shoppers are required to add their payment information that can be used for future transactions.

Google has rolled out a Conversation Search feature that according to the AdWords blog:

“On searches for the top-rated products, such as “Best women’s Nike running shoes,” we’re starting to show newly-designed shopping ads with authoritative rankings and product ratings. The new design is so helpful to those specific users that we’ve seen click-through-rate increases of up to 11 percent for retailers for these queries.Product queries that include “reviews” or “recommendations” are also increasingly common, so we’re showing new product review cards with product ratings and snippets from the most useful reviews from around the web. Finally, shoppers who want to learn more about a product’s features, like the resolution of the camera they’re considering purchasing, may now see a product attribute card with the most relevant information.”