Make News with the Firsts

The content that has gained  maximum shares for Olympics in last week centers around the newsworthy events. The shares are highest for content that stirs an emotion ranging from happiness, excitement  to surprise.

Peta Pixel’s post about Canon’s Stockpile at Olympics is shared with visuals that are likely to create an awe with the readers. Posts that are making it to the leader-board often shock the readers from their comfort zone inspiring them to share the feeling of awe that they experience.

Tell Your Brand’s Story In A Context

Content Marketing that makes your Brand’s story meaningful within the context is likely to resonate better. Bon Appetit’s post on What Olympians are eating for good luck strikes a chord with the followers of the games. Sequencing your posts with sports that are prime for the day and users are most engaged on is likely to bring in increased engagement. Bon Appetit’s post about Beach Volleyball was timed for the day of the event generating strong interest and promoted on Social networks. With Over 30 Million search results for any sport on google, you need a focused content marketing approach for your brand or content to be found. 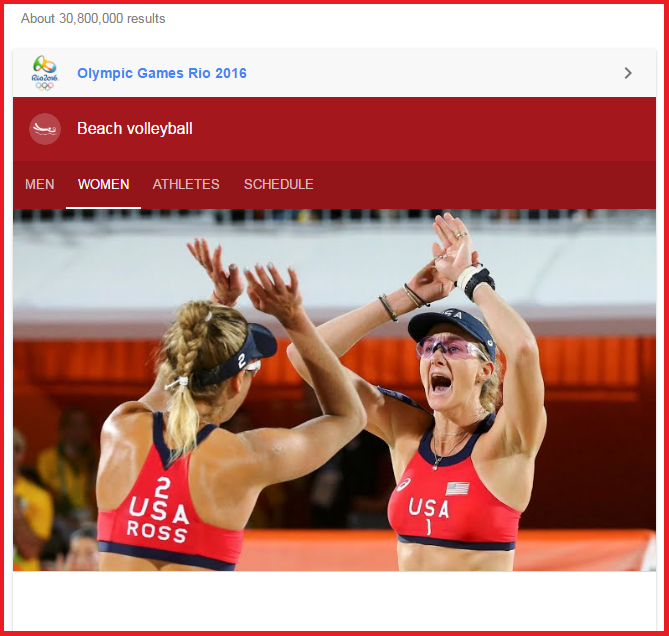 Promote Your Stories On Social Networks

Create engaging content with a story using influencers or a dedicated branded property such as the Olympics Breaking News. Promote the same with the hashtag that users are following the conversation on for the topic. 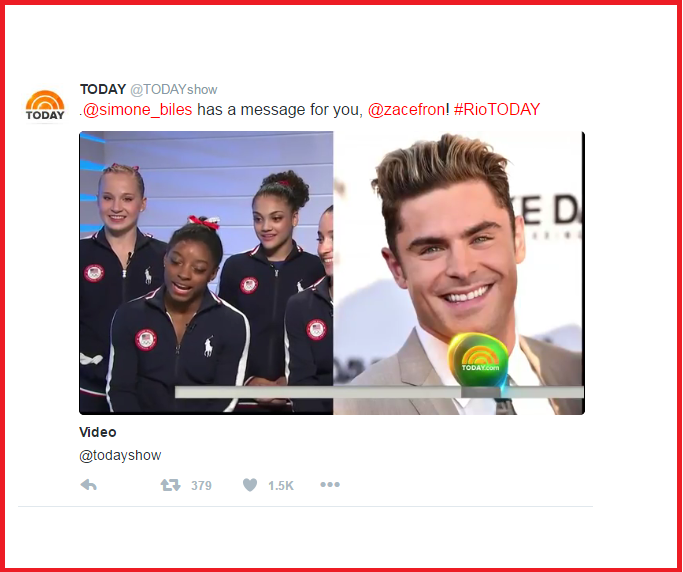 Video posts on social networks have generated the maximum engagement. The content on video other than the commercial advertisements that is most likely to be acted upon and engaged with ranges from quirky to behind the scenes stories that pique the interest of the viewers.

Behind the Scenes, Visual posts bring out a similar level of interest on social networks.

Adidas’ #SpeedTakes campaign with video posts sets apart the winning play for Olympians with posts that talk about what it takes to win. The posts are about how athletes can with focus, instinct, guts and creativity, imbibing the spirit of the games in the posts on Twitter.

Prepped for the job in hand. Ready to defend his title. #SpeedTakes focus. pic.twitter.com/W4YOkBkKa0

Viewers engaging with your content are looking for ways to follow the games with snapshot content. Organizing the information with summary posts and visual galleries, can make for audience that returns to your site or social media channels. 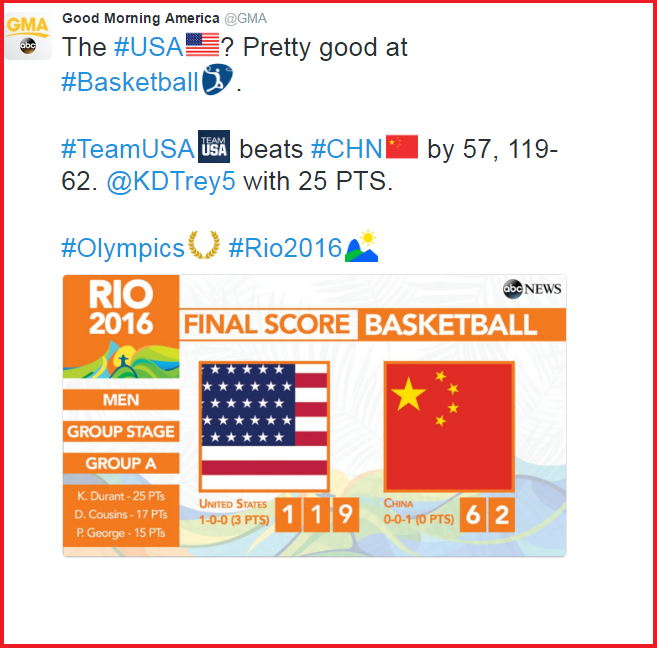 Aggregate your content with a simple user interface, where the audience can return to follow the topic. Aggregated content can make you the preferred network for knowing more about the topic. 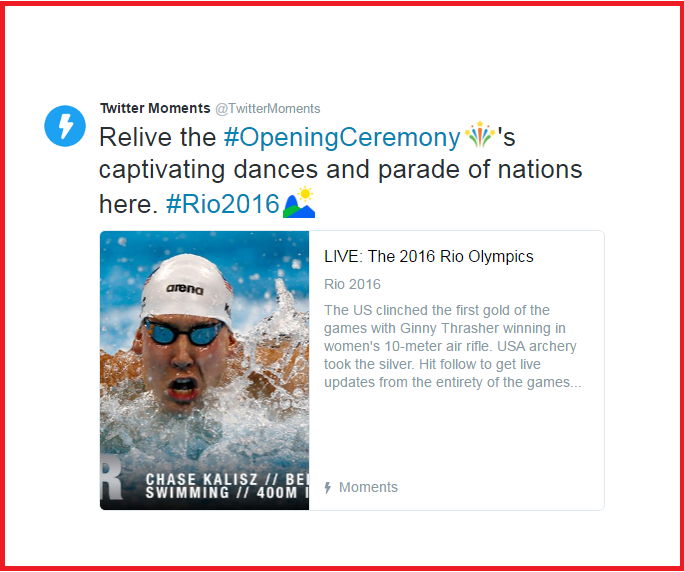 Audio streaming in the hot new kid on the block. Create Podcasts that are going to bring out the lesser known facts and figures about the Olympic games. 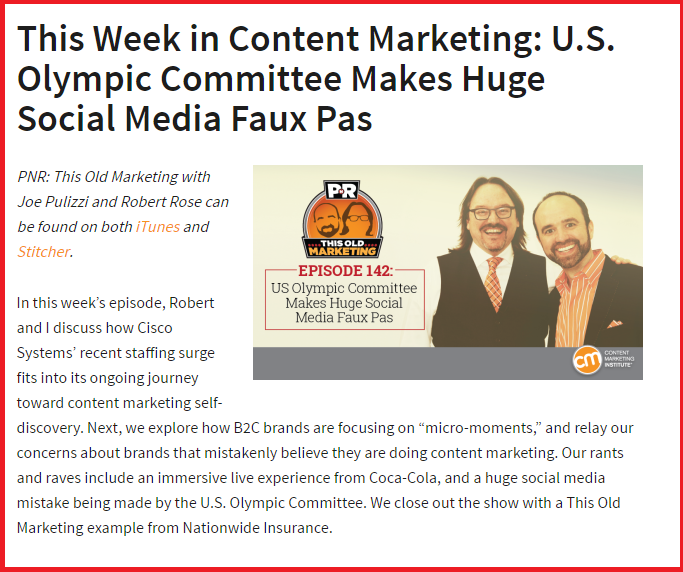 Mobile Advertising is projected to increase by 66 percent as per the KPCB Internet Trends Report. eCommerce as a percentage of Total Retail sales continues to grow making for a 12 percent share of retail sales. Mobile advertising presents the greatest opportunity for advertisers.

Snapchat’s Daily Video Views are at 10 Billion per day, as per the Mary Meeker’s Internet Trends Report. Taco Bell’s Cinco De Mayo Lens garnered over 224 Million views on Snapchat. Facebook tops the Digital Audience penetration with over 1000 Minutes per visitor in a month for the US market. Facebook owned properties including the messaging apps  lead in share of photos and make for 60 percent of visual sharing on social networks. 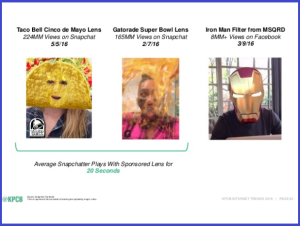 Voice Assistant Usage Increased by 9 Percent with 65 percent of Smartphone owners using Voice Assistants and location continues to be the  driving criteria for voice search queries. 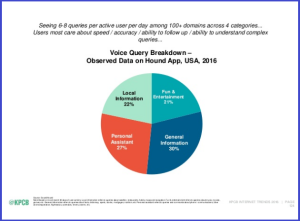 Millennials and Gen Zers vary in their use of technology and overall approach where Gen Zers prefer to communicate with images. Targeting users with campaigns that use Digital Interaction and unique social network features can create the right audience engagement.

As the two Super Heroes battled for the ultimate prize – an ice-cold Coca-Cola Mini Can, during the Super Bowl Sunday, Coca-Cola reintroduced Coke Mini, during the Big Game’s second quarter. Coca-Cola’s advertisement – “Coke Mini” – was developed in collaboration with Marvel featuring The Incredible Hulk and the tiny, yet astonishing Ant-Man. In the spot, the diminutive Ant-Man, voiced by actor Paul Rudd, attempts to swipe a Coca-Cola Mini Can from the refrigerator in Dr. Bruce Banner’s lab, only to be caught by the doctor mid-heist. In a fit of rage, Banner turns into Hulk and chases the tiny hero through busy city streets. Ultimately cornered, Ant-Man surrenders the Mini Can, but not before helping Hulk, whose fingers are too large to open the Coca-Cola Mini Can. Clearly friends, not foes, The Hulk and Ant-Man enjoy a little ice-cold Coca-Cola refreshment – and a special moment together – as the sun sets over a sweeping cityscape. “Sometimes you just want a little Coca-Cola” closes the spot, which fades to black, marking the kickoff of a virtual hunt for limited edition, Marvel-themed Coca-Cola Mini Cans.  “Coke Mini” will run throughout 2016 on TV, in cinemas and on social and digital media.

“Trends in the U.S. are driving smaller package sizes. This ad recognizes the trends and celebrates our smallest pack, the Coca-Cola Mini Can,” said Emmanuel Seuge, Senior Vice President, Content, Coca-Cola North America. “Coca-Cola’s ‘One Brand’ strategy puts the irresistible taste and feeling of an icy-cold Coca-Cola at the center of our storytelling. There is no better partner than Marvel, and no better platform than the Big Game, to bring this story to life in an epic and meaningful way – for the fans and for our brand.”

“The point of this spot is to not only remind people how much they love Coca-Cola… it’s to hero the Coca-Cola Mini Can,” said Andy McMillin, SVP, Coca-Cola, Coca-Cola North America. “We wanted to use the Big Game stage to celebrate our smallest package, which is key to our 2016 business strategy and a pack size people love.”

Marvel heroes themed mini cans are available and the virtual hunt gives users a chance to get A pack of six cans with marvel heroes-Hulk, Ant-Man, Black Widow, Captain America, Iron Man and Falcon on the pack. Each day through February 14, Coca-Cola will release hidden clues (known as “Easter eggs”) through its social media accounts, including Facebook, Twitter, Instagram, YouTube and Snapchat. Each individual “Easter egg” will unlock a limited number of cans and provide young adults direction for the chance to obtain a limited edition six-pack of their own. Marvel-themed, limited-edition Coca-Cola Mini Cans are not available for sale in retail outlets – and only available while supplies last.

“Americans are looking for greater variety from their beverages, and we’re helping shape consumer choice through smaller packaging options,” said Andy McMillin, Senior Vice President, Coca-Cola Trademark, Coca-Cola North America. “Smaller packages are a top priority for us in 2016, and so is making people more aware of the variety of choices they have across the entire Coca-Cola Trademark. ‘Coke Mini’ is an early example of our commitment to smaller packages. The partnership with Marvel is a bold and entertaining new way to drive home the choice of smaller packaging options available in our portfolio.”

This is the 10th consecutive year Coca-Cola commercials have appeared during the Big Game broadcast. Coca-Cola worked with Wieden + Kennedy (in Portland, Ore.) and Disney to create “Coke Mini.”

“Coke Mini” is part of Coke’s new global “One Brand” marketing strategy and accompanying “Taste the Feeling” campaign, which positions Coca-Cola at the heart of universal stories. “What we love most about this spot is that Mini Can is the true hero,” McMillin said. “The story doesn’t exist without it.”

“Teaming up with Coca-Cola for such an exciting project on a larger-than-life stage is just the beginning of a broader partnership,” said Mindy Hamilton, SVP, Global Partnerships, Marvel. “As we build up to the release of Marvel’s ‘Captain America: Civil War,’ we look forward to celebrating both brands by creating some truly special moments for fans throughout the year.”

Instagram’s  video channel curated from users feed, can be seen with the explore tab for a topic, allowing content marketers to get their stories discovered in an instant. This is an organic content discovery tool that allows for an immersive video viewing experience the same as Facebook’s Instant Ads.

Other than Promoted Tweets and Promoted Trends, Twitter has introduced Promoted Moments, that will featured curated  brand stories that can be accessed from Moments Feed for 24 hours, with a Promoted badge.

Twitter has introduced the Moments that covers the best of curated stories with Tweets on the topic to give the highlights in an instant making content discovery on the go easy for mobile audiences. With Promoted Moments Brands can get their content discovered while featuring offers in a visually engaging format. How to use @twitter's new 'Moments' feature to tune in to tonight's debate https://t.co/UKi5ovtFOx pic.twitter.com/EZIYGKgdWe

Snapchat Discover is a content discovery tool that allows for videos and stories featured from select publishers that mobile audiences can browse and share on the go.

According to Wired, “Snapchat launched Discover earlier this year as a new way for its millions of predominantly young users to follow daily news and entertainment without ever leaving the hugely popular app. Discover features nine partners each with their own controlled “channel” that stays up for 24-hours, including media companies like Vice, ESPN, and CNN”.