Special K is celebrating women with a  video  of top moments in sports, the arts and  everyday life. By highlighting and elevating the stories of real women, Special K will make the world take notice of everything they are and everything they aspire to be. 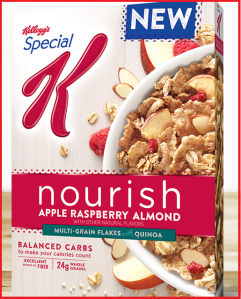 Celebrating the strength of the women, Special K in partnership with JWT has launched a new campaign “Fortify”, with 15 and 30 sec spots set to air January 4,2016. According to AdAge, “In a continued shift away from dieting, the new “Fortify” work from JWT does not mention calories, which were called out in the April campaign though were not the main focus.”

Jeremy Harper, Senior Director-Marketing at Kellogg, said he feels the new work is “celebrating the inner strength that we know every woman possesses” and that the brand is “focusing on providing women with foods that are both delicious and nourishing so we can do our part to help them stay strong.”

Special K Nourish contains multigrain quinoa flakes, a first for the brand, along with ingredients such as granola clusters, apples, raspberries, and nuts. It hits U.S. stores in January with a suggested retail price of  USD 4.49. Mr. Harper called Nourish “transformative,” citing the variety of ingredients such as coconut, granola and quinoa. The cereal is set to hit the stores in January.

According to AdAge, “JWT developed the new creative for Special K, and other agencies involved in the push are Krispr Communications,VML, Starcom and Integer. A print ad is set to begin appearing in March magazines.” Special K will focus on Nourish in its advertising as the product launches in the U.S., and then will include the rest of the existing line and additional new products.

Special K range of products features  meal options such as Frozen, Bars and Treats, are going to be advertised later in the year according to an AdAge update. The brand site offers recipes for SpecialK products providing the nutritional information, prep time and instructions. The digital experience features the brand story and content that is designed to fortify customers with all that exists in the cereal world for #Whatsnext.  The rewards program for Special K links with Kellogg’s Family Rewards.

Special K has a special focus on Protein and Gluten Free Products.