Mobile devices make for 65 percent of all viewers for the Olympic games content, and YouTube viewers watched over 23,000 years of content in the last one year for the four most popular sports, athletics, gymnastics, diving and swimming and volley ball. For mobile NBC has a pop-up Snapchat Discover channel, planned during  the Rio Olympics. YouTube plans to  live stream video with 15 creators, signed up exclusively for the games.

Social Media sites are the popular go-to source for all conversations surrounding Key Sports highlights as seen for other major sporting events. The brand conversation surrounding Olympics, as tracked by Origami Logic has brought in 7.75 Million social media actions across the four major social networks. The initial tracking reports indicate that the top five brands leading in engagement are  Nike with 3 million likes, shares and other interactions. Under Amour followed at No. 2 with 2 million; Adidas with 2 million; Dick’s Sporting Goods with 164,000; and Ralph Lauren with 157,000.

Five Ways For Brands To Score At Olympics

Conversation on Social Networks for Sporting events are for sharing or viewing moments of thrill, excitement and connecting with other sports enthusiasts. Use of characters and brand menmonics  such as Vinicus, the official mascot for Rio Olympics 2016, who is known to combine the agility of cats, the sway of monkeys and the grace of birds, can help audiences connect emotionally. Characterizing your brand campaign for sports lend another dimension to a popular sports theme. Brand identity that leverages the affinity for a sport with characterization brings in increased engagement among sports enthusiasts.

Brands can extend product features with the help of influencers and famous athletes to make the campaign memorable leveraging the influence and fandom of famous athletes. 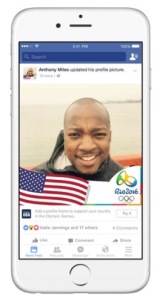 Visual posts are the lead engagement tactic on Social Media and creating freebies such as the stickers pack and freebies with a sports theme are a hit with users. Google’s research points out that 90 percent of the users are using Emojis to express their feelings. Users turn to social media for moments of celebrations for leading sports events providing brands an opportunity to engage fans with visuals for moments of victory on social networks.

Live Video highlights for the Rio Olympics will appear in the search results and YouTube WatchCards, with Google’s exclusive tie-up with broadcast companies including America Movil, BBC and Japan’s NHK in more than 60 countries. Using Search keywords that are likely to make your campaign discovered with the newer features from Google, that are exclusive to the Olympics, according to the Official Google blog:

Discover the event schedule, medal counts, and athlete information in Search
Get results and view TV schedules in 30+ countries
Watch official broadcasters’ event highlights on YouTube in 60+ countries
Explore Rio and venues in Google Maps
Keep up to date with the latest search Trends from around the world

Live Video Highlights offer Brands opportunities to showcase winning moments that bring out the campaign message or brand attributes that foster the bond with your audiences. Visa’s campaign for Olympics “The Carpool to Rio”,  features Athletes as they strike, jump, cycle and swim their way to Olympics. Facebook’s Live Video is key to Visa’s marketing by enlivening the athletes’  stories to bring forth the similarities with the  brand attributes. The campaign’s video posts are used for brand activation with featured partners.

Brands can associate with the games as non-sponsors with inspirational video and messaging. The brand conversation surrounding the message can be integrated with your existing campaign to engage viewers with your Olympics marketing efforts.

Hershey’s contest on Twitter invites users to share the message for Team USA with a Hashtag #HelloFromHome that could be your voice at the Rio Olympics.

Can’t wait for Rio? Start your own HERSHEY’S KISSES Countdown jar & watch the next 10 days fly by! pic.twitter.com/XZZVpG4LVr

Get behind @TeamUSA with a #HelloFromHome message. Yours could make it on a HERSHEY'S Bar for an athlete in Rio!https://t.co/YyrcNxmjij